I can feel it- my waistline HAS gotten bigger. The damages after the holiday season have happened. Sigh...For that reason, I have stopped the baking for a while until my stomach gets a bit flatter! Keep the flour, eggs, sugar and butter away from me... hopefully for not too long though!

But temptation is always lingering around the corner... Wanted to go on a diet, but instead I receive a wonderful box of macarons from Ladurée... how to resist? Impossible!

So silly me, I thought that if I photographed them instead of eating them, maybe that could help calm down my macaron craving - wrong! Fortunately however, I don't feel as guilty as macarons are always a pleasure to photograph. They are luxurious but fun, and most of all very inspirational. I especially enjoy linking them to girly accessories- rings, necklaces, lipstick and bags! A while back I had tried out taking such photos, and today I have the continuation. Although I am by far not a professional photographer (still probably need 100 years until that happens), but I do love sharing - food and photos! Enjoy! (you can also see them on my flickr stream www.flickr.com/photos/mariannaf)

Where it all starts...opening the box! 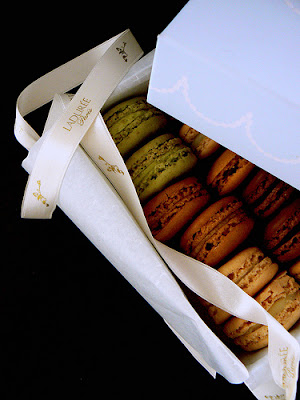 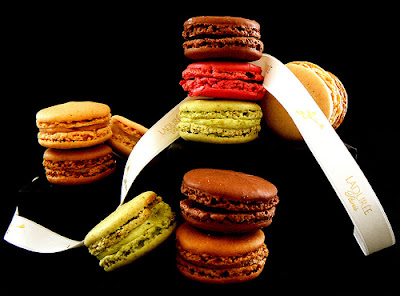 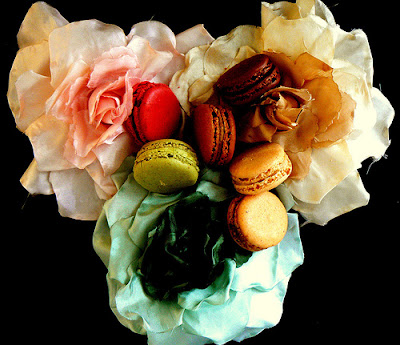 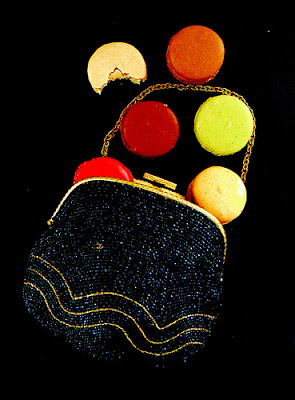 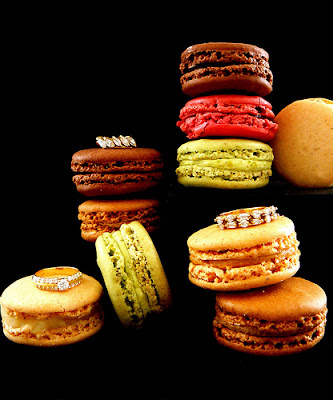 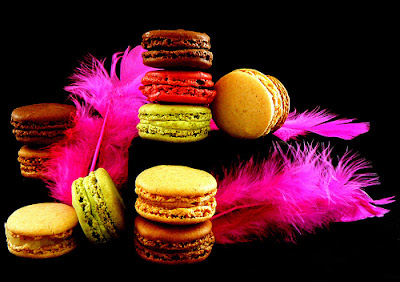 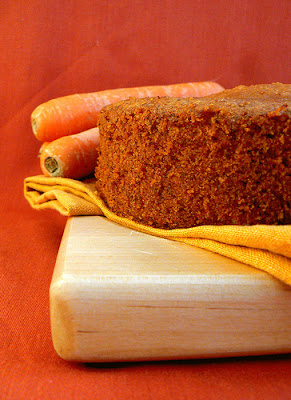 Well, it sure seems that I have been blogging classics lately- chocolate chip cookies, now carrot cake...what next?

Maybe it's because I've been a busy bee these last few days, with baking sessions schedueled in the wee hours of the day..."midnight baking" should I say! So there will be less talking this time, but more photos and a recipe at the end- a carrot cake recipe because, well, there were some sad looking carrots lying around in the kitchen and I felt I had to make some good use of them! Everyone has their very own carrot cake recipe, and mine has turned out quite well in the past years :-) 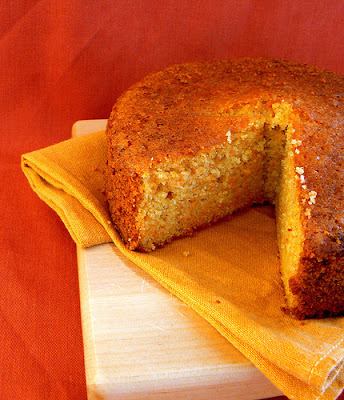 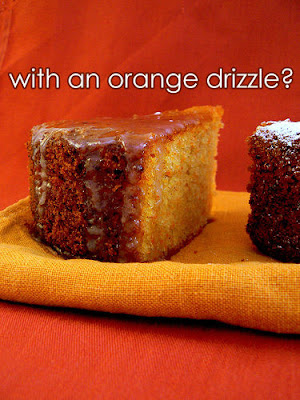 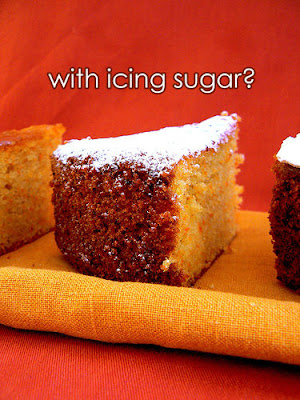 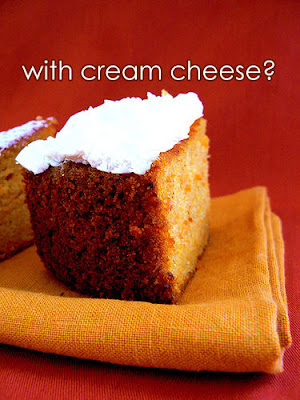 Ingredients (for a small cake mould):

There needs to be a chocolate chip cookie recipe somewhere in here... 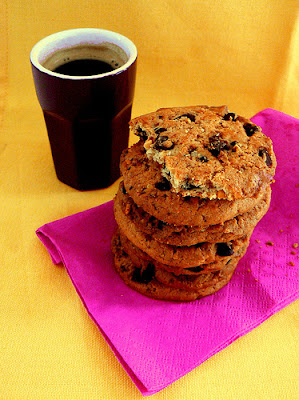 I figured that my blog may seem incomplete without a classic - chocolate chip cookies. Although they are not something I bake too often, I still have not found the secret to those chewy soft cookies that they sell at American stores over here...or at Starbucks even! What is that damn secret?!! If the answer is in one of those ready-mix boxes that are just missing an egg...well I won't give into that. In the meantime, here is a Lindt recipe with my addition of caramelized peanuts. Enjoy! 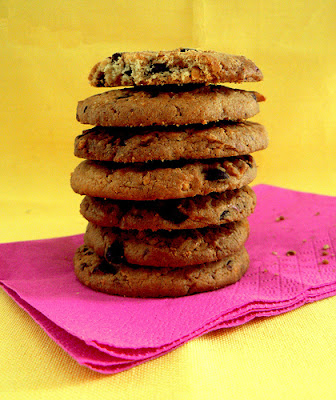 Holiday season isn't quite over yet... 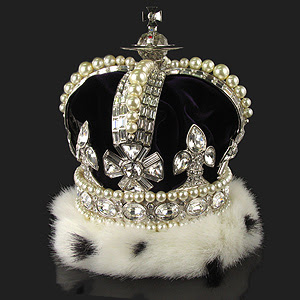 Who wants to be a king? It's the moment to feast upon the Galette des Rois! Even though it has been days that these golden treats have been exposed at boulangeries and patisseries accross France, today is the official day to enjoy one.
So holiday season indeed isn't over yet- and that directly implies that your waist line hasn't stopped increasing! Unless you can resist all the delicious goodness that has been happening since December... but that would never be the case for me.
As with Christmas' buches, patissiers in France have been flirting with the traditionnal galette to present one with a more personal touch. It seems that raspberries have been quite "the" ingredient to use this year as I've spotted quite a lot of galettes that include the divine pink fruit.
Of course, there are some names I naturally keep an eye on- Fauchon, Ladurée, Pierre Hermé, etc- to see what they've kept in store for this year's Epiphany. And so I compiled a small collection of some interesting approaches to the galette des rois: 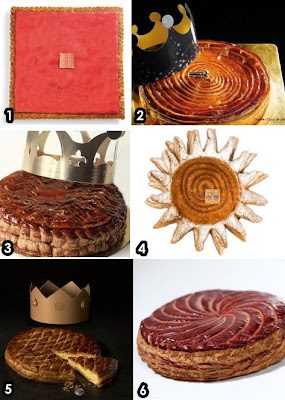 As you can see, the above descriptions all sound terribly mouthwatering and I'm sure are all worth a try. However, as much pleasure as they may provide, there is also an immense pleasure in home made galettes. In sticking to the historical idea that a galette should ressemble a golden sun, I tried my own thing and found myself drifting far far away from mr.puff pastry! 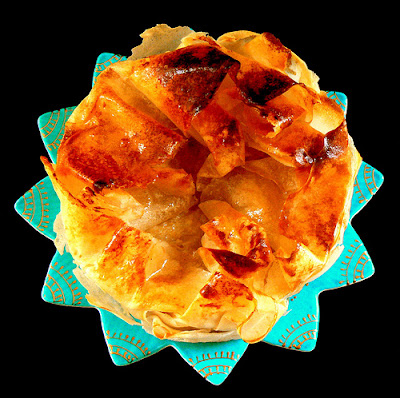 I went for phyllo instead- seven layers of phyllo to be precise! I guess this may be in reference to my origins (Middle Eastern and Greek) but in no way was it somesort of a round baklava! Replacing the nuts was a mixture of fresh apples and marzipan- and not frangipane because I have an issue with eggs. Imbedded in between the layers of crispy phyllo (lightly brushed with honey and butter), this galette of mine came out of the oven ressembling a flaming golden sun. What I was particularly pleased with was the taste of fresh apples- it added a fruity touch and there was a real taste of apples in there- not some kind of artificial apple flavouring. That's the nice thing about home baking- you get the real flavours of ingredients shining through.
If any of this sounds tempting to you, scroll down for the recipe: 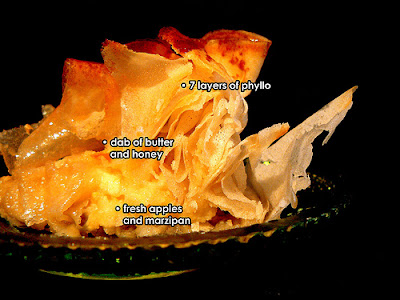 *Your mould needs to be smaller than the size of each phyllo sheet- this is essential!

Remember to place the fève somewhere in there!

P.S: If anyone is interested, there is an article in French newspaper Le Figaro about how to identify a top knotch galette! http://madame.lefigaro.fr/cuisine/en-kiosque/992-comment-reconnaitre-une-bonne-galette-des-rois/1

*Crown image is from a Vivienne Westwood creation.

The LBD of sweet treats 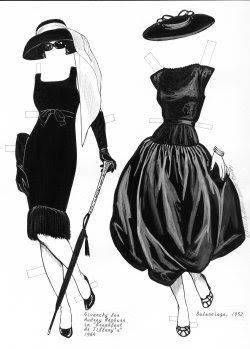 Panna cotta- the epitome of a classic dessert. The LBD of sweet treats. The glory of Italian deliciousness. Elegant and versatile- paint it with any colour, everything matches with it's innocent angel like white allure. Could it be one of the most beloved culinary delights in the world?
Inject some citrus energy into it, and you've got an orange-clementine panna cotta ready to be devoured. Even though such a thing has no place in my detox plan (eheeem)... but I just could'nt resist!

Actually, can you believe it- this is probably only the second time in my life that I've made panna cotta. I know that I've made it before back in university, but I wasn't such a big fan of it then, which led me to pay almost no attention to how it's prepared. Gees, I can't believe that I actually did not pay attention to how a panna cotta is fabricated! That's like a kitchen-crime! 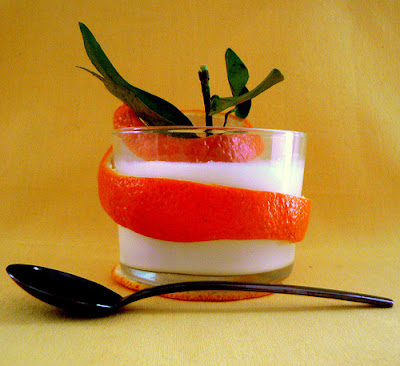 Well, to catch up, here is my panna cotta which I now realize is probably one of the easiest desserts to make in the world- and plus, is always a crowd pleaser. Could it be anymore perfect, may I ask?

For the photos, I had fun peeling off clementine twirls, and figuring out how to wrap it around the glass...even though it did take many trials until I got something decent looking. I'm wondering if I should start a series of desserts that include fruit ingredients, and photograph them as if they were bursting out of the fruit itself... I guess I'll get to it one day. Maybe I need to work on how to make proper use of lighting first. Sigh. Sometimes I wish I had some ultra professional studio and tons of equipment to help me take better photos... but all I have for the moment is a secret corner I found in my kitchen, and patience to wait for the right moment of the day when the natural light seems to work best.

Anyhow, as I'm extremely tired and soon I'll probably be writing complete jibberish, I better cut this short and save energy to write the recipe.

Oh by the way, I also changed my blog's layout and colour scheme. Ditched the dominant dark brown look- was never really too comfortable with it! I hope my blog looks nicer now :-) 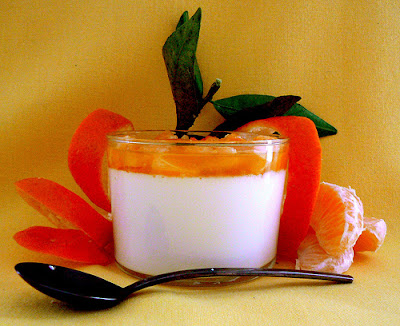 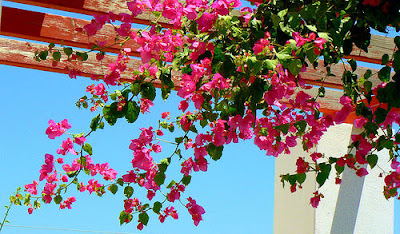 To start off, Happy New Year everyone! I hope '08 turns out to be a very blissful and healthy year! Although I never quite understood why new year celebrations were THAT big of a deal... it's not like your life changes overnight because the last number of the year becomes an 8 instead of a 7... I also think there is something impersonal about new year celebrations... the moments of change really come when you lose your first tooth, graduate, get your first job, fall in love, start on a new project... these are the real moments that mark one's life and are worth remembering and celebrating.

Let's talk about cake! Just a little more cake talk for me before I go on a 3 day detox plan... all that food stuffing over the holiday season needs to stop!
So, back to cake. Well, the story is that I wanted to try using a lot of grapefruit in something sweet. Grapefruit is not an ingredient I use too often when making desserts. Either it's a breakfeast food item, or on the sweet side, it's a sorbet. But what about it in cake? I find it such a beautiful fruit, with refreshing vibrant colours. It could only work in a cake that screams summer!
Initially, my ideas were floating around grapefruit and Campari... but because there was no Campari at home, and I was too impatient to bake, I put that idea aside- for the meantime. Then I was concerned with balancing out the bitterness from the grapefruit. It needed to be part of something sweet and tender, which suddenly brought back some nostalgic thoughts into my head. My mom used to make this signature cake which was something like a spongecake, literally bathed in freshly squeezed orange juice (sweetened), and then coated with whipped cream and coconut. It's without a doubt my mother's signature cake, and each bite is meaningful and packed with memories. So I decided to do something slightly similar, but not quite, which led me to this: 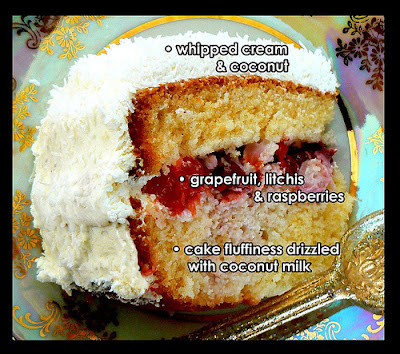 It looked pretty, smelled nice, and tasted absolutely wonderfully great! I just wish I had added way more fruits though. The cake texture is perfect, and each spoonful melts in your mouth bringing in exotic flowers, beach waves, sunrays, and pink skies... But beyond all that, what I enjoyed the most was the satisfaction baking (and cooking) can provide. I really do look forward for more memorable kitchen moments in 2008! For the recipe, scroll down... 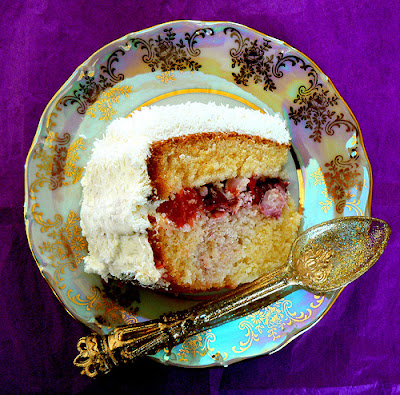 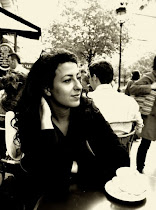 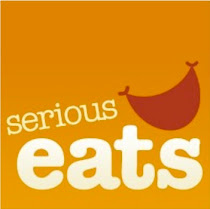 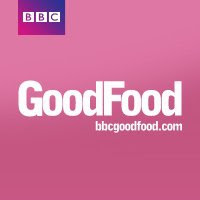